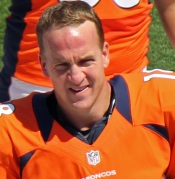 Man, New Jersey apparently must hate Peyton Manning. It’s threatening to tax his Super Bowl earnings at a rate of 51.08% if he wins. Or 101.83% if he loses. Seriously, 101.83%. And that’s just his New Jersey taxes; he’ll also owe federal income tax.

Or so says K. Sean Packard over at Forbes. In a widely circulated blog post,[fn1] Packard explains the tax trap that Manning will fall into by virtue of being the quarterback of one of the two teams playing in the Super Bowl this year.  END_OF_DOCUMENT_TOKEN_TO_BE_REPLACED

Over at Slate, Matt Yglesias mentions that, in addition to the existential questions surrounding bitcoin, there are a handful of practical questions that need to be worked out. Specifically, he wants to know if bitcoin transactions should be taxed and, if so, how they should be taxed.  END_OF_DOCUMENT_TOKEN_TO_BE_REPLACED

Well, another week without any significant movement tax-wise.[fn] The closest we came: an old friend with the government came to look at the various manors in Yorkshire, many of which are apparently in bad shape, to evaluate the effect of the war.

So I suspect that next week it’ll get back to what we care about. Until then, well, oh well.

For whatever reason, tonight’s Downton Abbey chose largely to focus on relationships rather than tax. (I know—what were they thinking?)

There is, of course, some movement on the tax plot: END_OF_DOCUMENT_TOKEN_TO_BE_REPLACED

On Tuesday, I wrote about the tax consequences to married same-sex couples of Utah’s decision not to recognize its same-sex marriages for the duration of the stay. The quick version is, that decision, combined with the federal government’s decision to recognize such marriages, was going to force Utah’s same-sex married couples to prepare dummy returns, substantially increasing the expense of filing their tax returns.  END_OF_DOCUMENT_TOKEN_TO_BE_REPLACED

On December 20, 2013, Judge Shelby of the District Court of Utah ruled that Utah’s prohibition on same-sex marriages violated the U.S. Constitution.[fn1] For various reasons, there was no stay of the decision, and approximately 1,300 same-sex couples married in Utah.

On Monday, January 6, the Supreme Court issued a stay of Judge Shelby’s decision, halting same-sex marriages at least until the 10th Circuit Court of Appeals has a chance to rule on the issue. END_OF_DOCUMENT_TOKEN_TO_BE_REPLACED

[Spoiler alert: if you haven’t seen Season 4, Episode 2 of Downton Abbey yet, this post contains an ever-so-minor spoiler.]

Tonight’s episode of Downton Abbey confirms my suspicion that Season 4 is the tax season. (Apparently, the writers were desperate to snare the tax attorney demographic.) So why is Lord Grantham so set on selling land to pay Matthew’s death duties? We learned tonight, in Episode 2, that other tax considerations have a lot to do with it.  END_OF_DOCUMENT_TOKEN_TO_BE_REPLACED

(Warning: depending on how far you are in Downton Abbey, there may be no, minor, or major spoilers ahead.)

Like apparently pretty much all British drama, Downton Abbey’s central, motivating issue is inheritance. As the series begins, Lord Grantham’s cousin and the cousin’s son have died on the Titanic. Lord Grantham has no sons, and doesn’t want to break the entail on the estate, so he cannot leave his estate or his money to his daughters. Instead, Matthew, a distant cousin, becomes the heir.  END_OF_DOCUMENT_TOKEN_TO_BE_REPLACED